Inside the Rooms of Buckingham Palace: Fun Facts!

Did you know Buckingham Palace has a square footage of 830,000 sq ft, making it one of the smallest of the European palaces?

The Palace is 108 metres long, 120 metres deep and 24 metres high, and has a central quadrangle (courtyard) to explore.

Within the palace are 775 rooms, which include a cinema, doctors surgery, post office and jewellers workshop, along with a swimming pool. There are 188 staff bedrooms, 52 principal bedrooms, 19 state rooms, 92 offices and 78 bathrooms. In addition, there are stables and storage for the elaborate State Coaches and carriages at the Royal Mews.

Every year, the Palace entertains some 50,000 guests at various banquets, receptions, garden parties and audiences.

The garden to the rear of Buckingham Palace covers 40 acres and includes a lake, tennis court and helicopter landing pad.

More than 800 people are employed at Buckingham Palace. 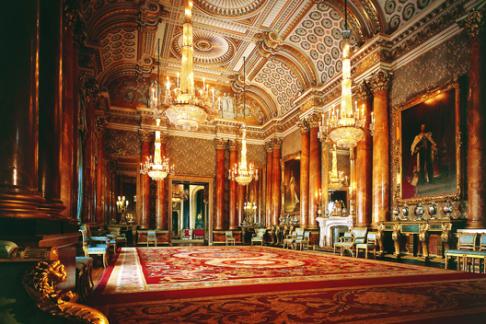 The largest state room is the Ballroom, completed in 1855 and used for investitures and State Banquets. State Banquets usually have 150 guests.

Buckingham Palace has been the official London residence of the British Royal Family since 1873, when Queen Victoria took up residence there.

Queen Victoria moved the Marble Arch from Buckingham Palace to its current position at the north-east corner of Hyde Park in 1847 to build a new wing to house her growing family.

The forecourt of the palace was built in 1911, and the North-Centre Gate is now the everyday entrance to the Palace, although the Centre Gate is used for State occasions.

The State Dining Room on the West side of the palace contains a highly polished mahogany table which reflects the ornate ceiling designed by Blore. This is a more intimate formal dining room.

The room behind the famous Buckingham Palace balcony is a Chinese styled sitting room which is in the centre of the East wing of the Palace.

Book your tickets today with 365Tickets.